Erica shared a beautiful photo of herself on social media via Instagram with a curvy shape and wonderful hips.

However, some of her fans disagreed with the sudden obvious hips which further brought about the speculation of the actress doing a hips enlargement procedure just like a fellow reality star, Nengi. 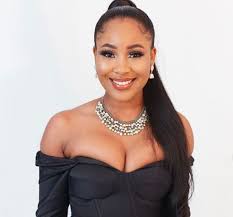 A fan however suggested otherwise.

“she clearly wearing a corset dress relax… but it shows if she did decide to do her body she would kill you and your fav with heart attack,” the fan wrote.