Charges Against Omah Lay And Tems In Uganda Has Been Dropped 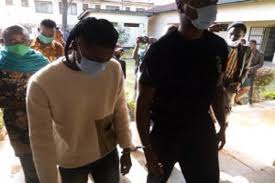 Administration of Uganda Tuesday dropped charges against Nigerian artistes Stanley Omah Didia, aka Omah Lay, Temilade Openiyi, aka Tems and their director, Muyiwa Awoniya who had been remanded in jail for the offense of disregard act liable to spread Covid-19.

The trio will fly out of Uganda tonight following a mediated diplomatic run.

“…the accused persons (Muyiwa Awoniya, Temilade Openyi and Stanley Omah Didia) were charged with the offence of neglect act likely to spread an infectious disease contrary to section 171 of Penal Code Act.

The charges against the accused has been withdrawn against them. This is to direct you to release the said accused persons from your custody forthwith unless held on other charges,” reads the withdraw form signed by grade one magistrate Jude Okumu.

However, the four Ugandan organizers of the concert will remain charged with the offence.

They were arrested yesterday for disobeying Covid-19 guidelines meant to curb the spread of the pandemic.
Their fans took to social media sites such as Twitter and Facebook condemning the arrest of the two musicians as others called for their immediate release.

“Wasn’t there prior publicity about the show? Why wasn’t it shut down before it was held? Why are you arresting artistes that performed? Who organised the show?” Olamilekan Agbeleshe, famously known as Laycon on social media, a reality show star of Big Brother Nigeria, asked.

The Grammy nominated artiste, Burna Boy, also called for the release of the two musicians.

Runtown, another singer, said: “It is a total shame that Nigerian artists Omah Lay and Tems, who flew into Uganda legally for a publicly announced event, are being hounded and embarrassed in such a manner.”

The two artistes alongside their handler Muyiwa Awoniyi were arrested after they held a concert dubbed, “The Big Brunch, Afro Beats edition,” at Ddungu Resorts in Munyonyo, Makindye Division.

This was after Omah Lay shared a picture of himself with the crowd of people who had turned up for the show at a time Ugandans are restricted from moving after 9pm or gathering as a way of fighting Covid-19.

The two Nigerian nationals alongside the concert organisers and the owner of the venue were charged with negligently performing acts likely to spread an infectious diseases and were remanded until Wednesday.

ALSO READ: Burna Boy, other celebrities call for the release of Omah Lay and Tems as they’re remanded in prison in Uganda