Deborah Oluwaseyi Joshua (born Oluwaseyi Odedere; 21 December 1985), professionally known as Seyi Shay is a Nigerian-based singer, songwriter and actress.  In 2008, she became the lead singer for the now defunct pop girl group From Above. The group signed a recording deal with Sony’s Columbia Records and was managed by Mathew Knowles’ Music World Entertainment company. In November 2013, Shay signed an endorsement deal with telecommunications service provider Etisalat. In July 2015, she signed a record deal with Island Records. Shay released her debut studio album Seyi or Shay in November 2015. It was supported by the promotional singles “Irawo“, “Ragga Ragga“, and “Chairman“.

Shay was born and raised in Tottenham, London, England, to Nigerian parents. Her mother was from Northern Nigeria and her father is a native of Ife. She went back to London to complete her undergraduate studies. Her interest in music was influenced by members of her household. Her late mother was a chorister and her sister used to compose songs for TV.  Moreover, her brother was a radio and club disc jockey. Shay joined her secondary school choir and started performing at the age of 6.Sh included 13 cities in Japan. Shay was applauded for her performances in Japan. She studied music at a local UK college and went on to study business management at the University of East London.

Shay was introduced to Sound Sultan during his visit to London in 2011. After listening to some of her demos, Sultan convinced her to relocate to Nigeria and pursue her musical career there. In addition to meeting Sultan, Shay was introduced to Cecil Hammond of Flytime Promotions. Hammond signed her to his record label Flytime Music and decided to launch her solo career in Nigeria. In 2013, Shay left Flytime Music and told Vanguard newspaper that she had joined the label to promote her brand. She also said that while signed to the record label, she was very much in control of her brand. Moreover, she said she still has a relationship with the label.

Although her musical style is primarily a combination of Afropop and R&B, Shay doesn’t conform to a particular genre of music. She believes that her musical prowess covers different genres, and has stated that her music draws from things that inspire her. Shay has cited her mother, Mathew Knowles, 2face Idibia, Beyoncé, Tina Turner, Sound Sultan, Wizkid, and Omawumias mentors 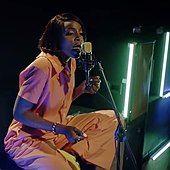 Shay released her debut studio album Seyi or Shay in November 2015. Work on the album started as early as 2011. Shay worked with several producers in Nigeria, including Jay Sleek, Tee Y Mix, Del B and Cobhams Asuquo. On 11 August 2011, she released “Loving Your Way” and “No Le Le“, two promotional singles that helped launched her singing career in Nigeria.

On 27 July 2012, Shay released “Irawo” as the album’s lead single. The song was produced by Del B and was originally titled “Erawo“. During the aforementioned interview with Ajose, Shay said she wrote “Irawo” to inspire her colleagues and workmates to pull together. The music video for the song was shot and directed in Nigeria by Clarence Peters. It was uploaded onto YouTube on 3 June 2013, at a total length of 3 minutes and 47 seconds. The remix of “Irawo” features rap verses from Vector and was released on 6 December 2012.

In August 2013, Shay released the album’s second single “Killin’ Me Softly“, featuring Nigerian singer Timaya. On 6 October 2013, Shay released “Ragga Ragga” and “Chairman” as the third and fourth singles from the album. The songs were produced by Del B. The latter features vocals from Kcee, a recording artist who was present during the song’s composition. Prior to releasing the singles, Shay signed a partnership deal with the international talent company J-Management.

In March 2019, Shay announced on Instagram that she had been given a concert residency in the United Kingdom. The 2-night residency at the Biosdale of Canary Wharf in London was billed to hold on 29 and 30 May 2019.

In 2018, the singer, Seyi Shay took on the leading role as Lara in the Nigerian drama film,  Lara and the Beat, which was directed by Tosin Coker. The film premiered on 8 July 2018. She acted alongside other Popular actors and actresses.

Seyi Shay is one of the richest Nigerian artiste as she is estimated with a net worth about $2.1 million.